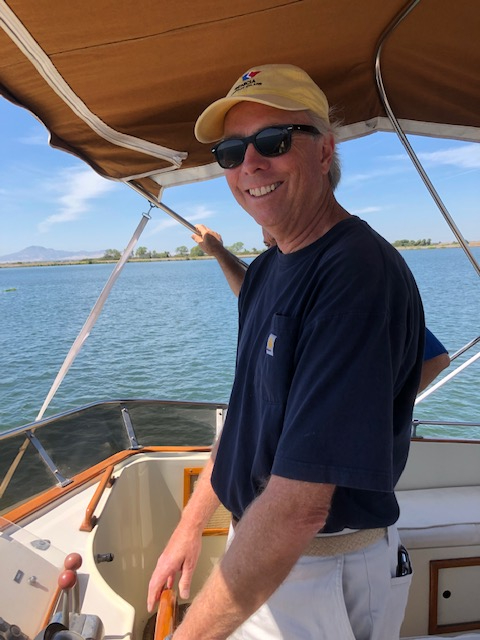 Sailing: Dan Carnahan was introduced to sailing on his uncle’s race yacht in Long Beach in the 1960s, and he has been sailing ever since. Dan completed nearly the full course catalog at Club Nautique Sailing School, Alameda, in the 1980s-1990s. For three years in the 1990s, Dan organized and skippered weekly sailing trips out of Alameda and Benicia. In the early 2000s, for another three years, Dan served as crew, foredeck, in the Benicia Thursday night races. Dan started racing his own boat, a Santana 22, starting in 2013. Dan took over the management of the races, as Race Chair, in 2017 and is still serving that that position. In 2018-2019, Dan earned his USCG captain’s license, and during 2019 he was employed as a professional captain for a pleasure cruising charting company in Alameda.

Teaching/Coaching: Dan’s experience in leadership, teaching and coaching began during high school years, serving as a YMCA camp counselor, then as Assistant Scoutmaster for his Boy Scout Troop. He was employed by his church, serving as Youth Counselor during college years. In Benicia, Dan has served as head of the Men’s Ministry at his church, and he served professionally as Youth Pastor. Dan has served as an adult volunteer with Benicia’s Boy Scout Troop 8 since 2000 and continues still. He served several years as Scoutmaster, and several more years as Committee Chair. Today, through his professional coaching business, Dan helps entrepreneurs and business owners in a coaching/accountability capacity to achieve their business goals.

Caring: Dan helps those who are learning to feel supported and understood. He is calm and patient. His students feel comfortable and safe, not only physically, but emotionally as well. Dan knows that everyone begins their learning from the beginning, as he did. And Dan’s love for being on the water and with others provides for a very happy experience for everyone.

Benicia: Many people love the picturesque setting that surrounds the bustling little town of Benicia. It lies on the Carquinez Strait of the San Francisco Bay Area, has an active boating community and yacht club. Seeing the sailboats out on the glistening water gives many the inspiration and desire to be a part of the sailing activity. But, until now, there has been no organized method for people to become involved. Dan has a heart to help create the way to bring people to the water and to the boats. Dan is now in the perfect position, as Race Chair, and as an experienced teacher and coach, a sailboat owner, and licensed captain, to make it a reality. Captain Dan’s mission is to provide the pathway for anyone to gain access to the exciting world of sailing.